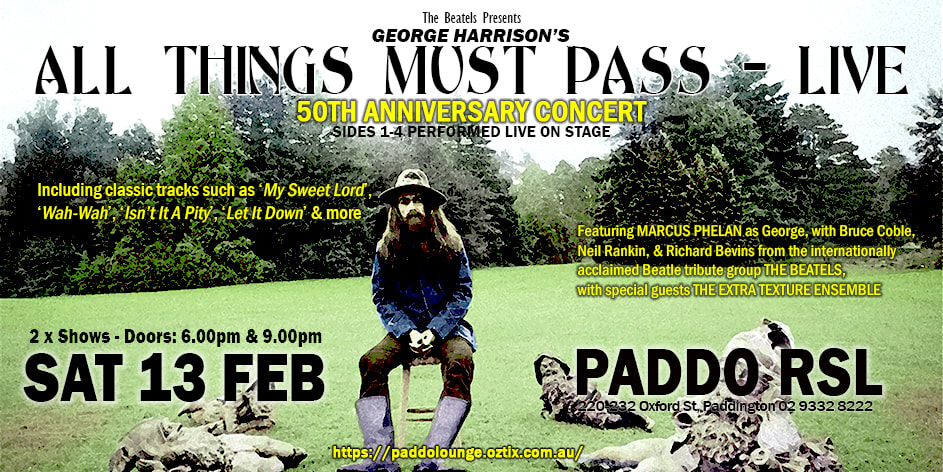 ALL THINGS MUST PASS - LIVE

It is now 50 years since George Harrison released his triple album debut, which spawned a number one hit My Sweet Lord, which stayed at that position for 5 weeks back in 1971, & then made number one again in 2002! Featuring the classic album cover shot of George in the garden of his Friar Park property in his gumboots, the album showed what a prolific writer the younger Beatle had become, and featured a who's who of musicians from that time. It featured a range of brilliant tunes, including Let It Down, Wah-Wah, Isn't It A Pity, and the title track All Things Must Pass. The album was produced by Phil "Wall of Sound" Spector, and quickly became a classic. The timing of this show has added poignancy, as it will also be 20 years since George's passing. What better way to enjoy his brilliant musical legacy than to play All Things Must Pass, track-by-track!

In the upcoming show, THE BEATELS will be performing sides 1 to 4 live on stage. (There were 6 sides to the original triple album release, with the last 2 sides being mostly jams recorded at the time, that Harrison felt should be included in the release). Joining THE BEATELS (Marcus Phelan as George, Bruce Coble, Neil Rankin & Richard Bevins) on the night will be THE EXTRA TEXTURE ENSEMBLE to provide the extra texture that is required to bring these songs to life on stage, featuring Darren Richards, Steve Alonti, Rod Crundwell, Josh Ross, Doug Hazell & Kendal Cuneo.

Tickets are available here via Oztix. For more information, please Paddington RSL on 02 9332 8222. Tickets are limited and they will sell out quickly, so make sure you get yours early!